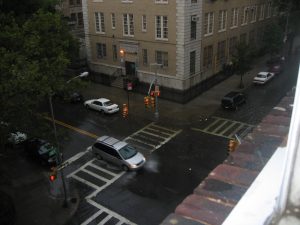 Thus, in each of the two charges, the law requires that the perpetrator aid or be aided by two or more other persons. In People v. Fatal, 187 Misc.2d 334, (Sup. Ct. Kings Co. 2001), Judge Carolyn E. Demarest explained that the “actually present” language was taken “verbatim” from the second-degree robbery statute, PL 160.10(1). The presence requirement had been definitively decided in People v. Hedgeman, 70 N.Y.2d 533 (1987), where the court ruled that ‘actual presence’ was required, and not just ‘constructive presence.’ The factual example from the Hedgeman case of constructive presence was the presence of a getaway driver in a robbery. In Hedgeman, the Court of Appeals ruled that the getaway driver could not be convicted of second-degree robbery because, “whereas a ‘constructive presence’ may be sufficient for accomplice liability, it is insufficient to establish the aggravating element requiring aid from another actually present.” Hedgeman, 70 N.Y.2d at 539. Thus, when it comes to Gang Assault, if the actor is merely an instrument in the asssault, but not actually physically present, the evidence will be insufficient to sustain an indictment. However, Judge Demarest distinguished the ‘getaway driver’ fact-pattern in Hedgeman because the defendants “accompanied by a fourth person, were together in an automobile and individually and simultaneously fired shots from the car window allegedly causing death to [one victim] and serious physical injury to [the assault victim].” Fatal, supra. There, because the defendants were physically present in the vehicle from which the assault took place, their conviction was sustained.

In People v. Hill, 52 A.D.3d 380 (1st Dep’t 2008), the First Department found that the ‘aided’ element had not been met. There, two defendants, Hill and Dandridge, were convicted in a trial held before the Honorable Edward J. McLaughlin in Manhattan. In that case, “the only serious injury suffered by the complainant was [a] stab wound inflicted by another codefendant.” Id. at 381. In other words, neither Hill nor Dandridge were the primary actors with respect to the assault. The court noted that with respect to defendants charged only with Gang Assault in the Second Degree, i.e. the secondary actors, the requirements of accomplice liability found in PL 20.00 apply: “In order to find [them guity of that charge], the jury would have to find that each defendant, acting with the mental culpability required for the commission of the crime, solicited, requested, commanded, importuned, or intentionally aided the knife-wielding codefendant to engage in the conduct constituting the offense.” Hill, 52 A.D.2d at 381. Full text of PL 20.00 below:
§ 20.00 Criminal liability for conduct of another. When one person engages in conduct which constitutes an offense, another person is criminally liable for such conduct when, acting with the mental culpability required for the commission thereof, he solicits, requests, commands, importunes, or intentionally aids such person to engage in such conduct.

The Appellate Division reviewed the record and determined that there was insufficient evidence presented at the trial on accessorial liability to sustain defendant Dandridge’s conviction. Id. at 382. The Court did find, however, that there was sufficient evidence to sustain Hill’s conviction on this point. The First Department found, however, with respect to Hill that the instruction given on accessorial liability and the justification defense were “confusing and erroneous.” Id. Thus, Judge McLaughlin’s judgment of conviction was reversed with respect to both Hill and Dandridge.

The First Department rejected the argument that “a person cannot be found to have ‘aided’ a defendant in committing a gang assault unless the aiding person shared the intent required to support a conviction for that crime . . . .” Id. at 82. Again analogizing to the robbery statutes, the Sanchez Court noted that the law there was that “a person may be found to have ‘aided’ another person’s commission of an offense even if the aiding person did not have the intent required to be found guilty of participating in that offense.” Id. Quoting People v. Green, 126 A.D.2d 105 (2d Dep’t 1987), the court explained that “one may aid in the commission of a crime without having the mental capability necessary to be guilty of that crime as an accomplice.” Id. quoting Green, 126 A.D.2d at 110. This was based on the distinction in the law between criminal facilitation, PL 115.00(1) and accomplice liability (reprinted above). The court essentially decided that the ‘aided’ standard could be met by an act that would have rendered a person liable for criminal facilitation, but not necessarily as an accessory. Thus, Sanchez’s conviction was affirmed.

There are several other decisions dealing with the crime of Gang Assault in New York. If you have been charged with this offense in Manhattan, New York City or surrounding communities, you should consult with a New York City criminal defense attorney with knowledge of this particular kind of offense.