The legal prohibition of gravity knives is one of the most vexing crimes in New York state law. First, many people get arrested for this crime without having any idea that their knife is illegal, and this is very understandable given that “gravity knives” were for so long so readily available throughout New York state at Army/Navy stores, Wal-Mart, and even Home Depot. (For more information on knives and New York retailers, see here). Second, there is serious disagreement about what is and is not a true gravity knife, and the answer is not always so clear in a courtroom. Indeed, we find that prosecution for this crime can differ wildly from jurisdiction to jurisdiction. Nevertheless, our extensive experience with these types of arrests allows us to fairly summarize the risks involved in carrying certain types of weapons, and also describe what NYC police officers consider to be a knife worthy of an arrest.

Under Penal Law Section 265.01, it is a Class A misdemeanor punishable by up to one year in jail to knowingly possess a gravity knife. The stakes for these cases are even higher for people who have criminal records. Indeed, anyone with a criminal record – even just a previous conviction for a misdemeanor – is subject to possible indictment for the Class D felony of Criminal Possession of a Weapon in the Third Degree (Penal Law Section 265.02[1]) for merely possessing a gravity knife. The penalties for a conviction on this felony charge can include multiple years in state prison.

A gravity knife is defined by Penal Law Section 265.00[5] as “any knife which has a blade which is released from the handle or sheath thereof by the force of gravity or the application of centrifugal force which, when released, is locked into place by means of a button, spring, lever or other device.”

Interestingly, the term “gravity knife” now applies to knives that were not contemplated by the Legislature back when the prohibition against them was enacted. Indeed, the original “gravity knife” was a blade designed for paratroopers in World War II. Paratroopers were obviously at risk for getting caught in trees and tangled up in their parachutes, so they needed knives that they could open easily with one hand to cut themselves free from those situations. To address this need, the US Army designed a knife in which the long thin blade could slide in and out of a hole at one end of the handle by simply turning the handle upside down. In short, the paratrooper could push a button in the handle and the blade would fall out of the handle via the force of gravity. Notably, the blade did not fold open out of the handle – the blade was more akin to the point of a clickable ballpoint pen in relation to the handle of the knife.

Nowadays, however, the vast majority of arrests for “gravity knives” in NYC involve knives for which the blade folds out of the handle. The classic folding knife – like a Swiss Army knife, for example – typically requires two hands to open: one hand holds the handle, and the other hand pries open the blade from the handle. However, the knife becomes a “gravity knife” in the eyes of New York law if it can be “unfolded” with one hand. Oftentimes, these “gravity knives” are really nothing more than folding knives that became loose in the hinge holding the blade in the handle. Some of these knives are classified by manufacturers as “speed-assist knives” or “Kershaw knives,” and have internal springs that allow the blades to open easily and lock into place. But many of these gravity knives are really nothing more than standard folding knives – like Swiss army knives – in which the hinge connecting the blade to the handle is loose enough for a person to flick the knife open with one hand. 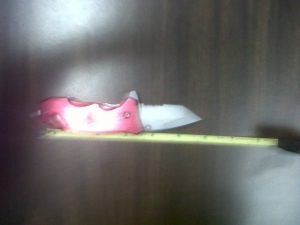 Police officers have been trained to “test” knives for whether they are gravity knives by flicking them downwards as hard as possible in an effort to get the folding blade to come out and lock into place. They may try four or five times before they are successful, but if they can get it to work, then, chances are, you are going to get a Desk Appearance Ticket (DAT) or outright arrested. We have seen officers at trial embarrass themselves somewhat by failing to get the knife to open on the first few tries in front of a jury, although we have never seen an officer fail altogether. We have also been surprised to hear NYPD police officers say, under oath, that they have been given the authority and discretion to let someone go or merely issue a summons if the owner of a gravity knife claims to use it for his job. However, there is no legal defense entitling someone to avoid arrest or be found not guilty at trial based upon the knife being used for work or being transported to or from work. (Unlike in some other knife charges). There is, however, an exemption for certain licensed gravity knives when engaging in hunting, trapping, or fishing activities (see Penal Law Section 265.20[6]).

If you or a loved one have been arrested for possessing a gravity knife, you should contact the experienced criminal defense attorneys at The Law Office of Matthew Galluzzo. Their attorneys have worked with experts from the American Knife and Tool Institute (AKTI) to better understand the manufacture and characteristics of various knives, and thus are experts themselves when it comes to representing individuals charged with possessing gravity knives and other illegal knives. They have negotiated numerous favorable dispositions for their clients and have also securedsurprising trial acquittals because of their technical expertise in this area.